Sign up for our e-newsletter to receive campaign updates and breaking news.

Ensuring People with Convictions Have a Fair Chance to Work

Scroll over states for more information

NELP’s Ban the Box State and Local Guide documents the policies across the country.

The Fair Chance to Compete for Jobs Act of 2019

The Fair Chance to Compete for Jobs Act of 2019 is a federal “ban the box” policy that was signed into law on December 20, 2019. In partnership with grassroots organizations, Congress, and other criminal justice advocates, NELP has advocated for this crucial legislation at the federal level for years. The law prohibits federal employers and private employers that contract with the government from inquiring about conviction history until a conditional offer has been made. The law not only provides ban the box protection, but it also includes complaint and appeal procedures for any employers that violate the policy.

NELP estimates that 700,000 new applicants with records will have a fairer chance at employment when the law takes effect in 2021.

Learn more: FAQ on the Fair Chance to Compete for Jobs Act of 2019

The Business Case for Fair-Chance Employment

Billions lost to our economy because of the poor job prospects of people with records is a real business concern, but the human potential squandered and the negative impact on our communities are the real tragedies. Employers can take concrete actions to be part of the solution. Find out more in our blog.

The Fair Chance – Ban the Box Toolkit was developed to be a one-stop, comprehensive resource for advocates interested in bringing fair chance hiring reform to their communities. As a national organization, we’ve benefited from hearing from leaders and experts about their campaigns. We’ve distilled these “lessons learned” into the Toolkit. For example, included are: 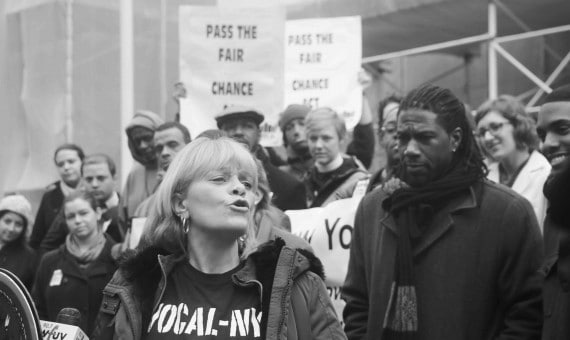 New Yorkers urged passage of the NYC Fair Chance Act at a December 2014 rally by VOCAL-NY and allies.

More than 70 million people with a record in the United States either face significant barriers when seeking a license to work, which is now required for one in four jobs, including many good-paying jobs that are in high demand in healthcare and other industries, or—even worse—they are automatically disqualified, sometimes for life.

A license to work is now required for one in four jobs.

The toolkit: Fair Chance Licensing Reform: Opening Pathways for People with Records to Join Licensed Professions (December 2019) is intended to provide lawmakers and advocates in states across the country with the resources necessary to set about the work of fair chance licensing reform.

Fair-Chance Reform in the Nation is Growing Rapidly

From 2013 to 2014, more than twice as many jurisdictions adopted policies to reduce hiring barriers for qualified job seekers with a past conviction. 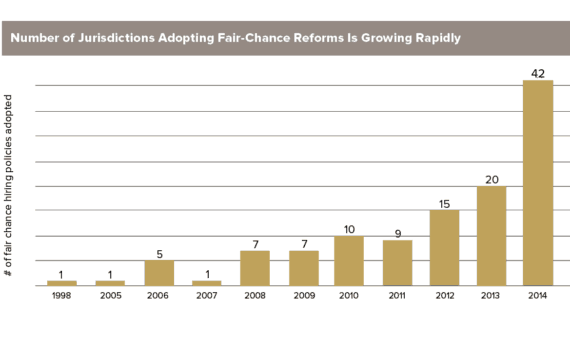 Note: Some jurisdictions were counted twice, because additional policies were adopted for the same jurisdiction in multiple years.

The California Fair Chance Act (AB 1008) took effect on January 1, 2018. The law ensures that employers fairly consider job applicants with a record by delaying when an employer can ask about an applicant’s conviction history or run a background check.

This FactSheet outlines the law and Fair Chance hiring process, and explains jobseeker rights: The California Fair Chance Act: Know Your Rights as a Jobseeker Under the New ‘Ban the Box’ Law

The “Unlocking Opportunity for People with Records and Their Families” conference was held in Washington, DC on October 23-24, 2017. Links to conference videos and resources are below. 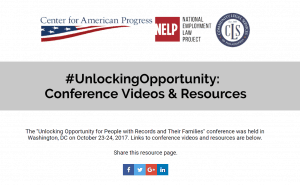 A conviction in one’s past shouldn’t be a life sentence to joblessness.

What is “ban the box”? What is a fair-chance policy?

“Ban the box” was the rallying cry of All of Us or None organizers that refers to removing the conviction history check-box from a job application.  All of Us or None is a grassroots, civil rights organization led by formerly incarcerated and convicted people. In addition to delaying conviction history inquiries until later in the hiring process, fair-chance policies include the following:

An employer is not required to hire an individual under a fair-chance policy. In other words, the employer retains the discretion to hire the most qualified candidate. Some fair-chance policies seek to limit background check inquiries to only those positions deemed sensitive or to limit the availability of certain criminal record information to only recent convictions. Other policies have no limitations on background check screening except as to delay any inquiries until later in the hiring process. Read more in NELP’s Best Practices and Model Policies, located in the NELP Fair Chance Toolkit.

Yes. Fair-chance policies have been so successful that some cities and states have expanded their policies to include private employers. Because policies were adopted starting in the early 2000s, several jurisdictions have had years of experience and success. The locations that have collected data on the fair-chance policies show an increase in hiring people with records.

This is consistent with research that indicates that personal contact with an applicant reduces the negative effect of a criminal record on the employment decision. Read more in NELP’s Research Summary, located in the NELP Fair Chance Toolkit.

Who has adopted fair-chance policies?

Currently 35 states and over 150 cities and counties around the country have adopted fair-chance policies. Thirteen states and many local jurisdictions apply their policies to private employers and/or government contractors. Starbucks, Target, Walmart, Home Depot, Bed, Bath & Beyond, Facebook, and the Koch Industries have removed the question about convictions from their initial job applications. Read more in NELP’s Voices in Support Factsheet, located in the NELP Fair Chance Toolkit.

FAQ: Fair Chance to Compete for Jobs Act of 2019

The California Fair Chance Act: Know Your Rights as a Jobseeker Under the New ‘Ban the Box’ Law

“Ban the Box” is a Fair Chance For Workers With Records

Why NELP Supports the #PrisonStrike

Washington becomes the 11th state to adopt fair-chance reforms for the private sector.

Our analysis of California fair chance laws will help employers comply with the law and advance best practices.