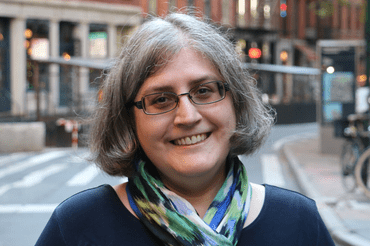 Amy Traub joined NELP in 2021. As senior researcher and policy analyst on social insurance, she conducts research and advocacy on state and federal unemployment insurance programs with a focus on racial equity, working to ensure that all people have access to the social insurance they need to achieve financial security.

Prior to NELP, Amy worked at the public policy organization Demos, where she had a broad economic justice portfolio with expertise on labor markets and job quality, racial wealth disparities, and policy around household and consumer debt. Partnering with organizations representing retail workers, federal contract employees, and hotel staff, Amy researched and advocated for policies including minimum wage increases, stable schedules, guaranteed paid sick time, and an end to discriminatory hiring and promotion practices.

Her policy work contributed to campaigns achieving a presidential executive order raising wages for 200,000 federal contract workers; raises at major corporations such as Walmart and Marriott; and the passage of laws restricting the use of discriminatory employment credit checks in several cities and states, among other victories for working people. In 2019, Amy developed a proposal for a public credit registry which was adopted by Joe Biden’s presidential campaign and became the basis for congressional legislation.

Earlier in her career, Amy oversaw an array of local, state, and federal research and policy efforts as head of the research department at the Drum Major Institute for Public Policy. She also worked as a researcher for the New York City hotel employees’ union.

Amy’s work has been featured in The New York Times, CNN, The Nation, Slate, The Hill, Forbes, and other publications. She has testified before Congress, state legislatures, and city councils.

At NELP, Amy is a proud member of the NELP Staff Association, NOLSW, UAW, Local 2320.

Why is Expanding Unemployment Insurance Eligibility a Racial, Gender, and Disability Justice Imperative?

7 Things We Learned About Unemployment Insurance During the Pandemic

In support of HB 4202: An Act Relative to Waivers for Non-Fault Overpayments